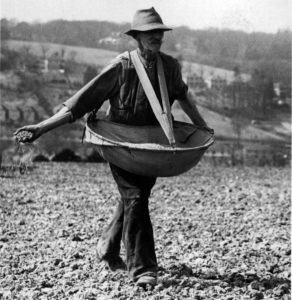 This article appears in the latest issue of the Monmouthshire Meadow Group (MMG) magazine. It tells of the background to how the Festival Meadow, sited across the road from the Hanbury Arms, came about. 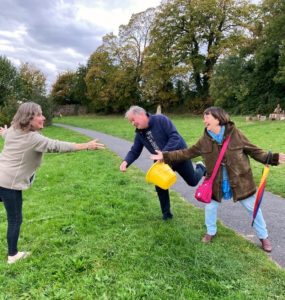 “A few years ago, Celf Caerleon Arts secured a long lease on the Hanbury Field, where the annual Caerleon Festival is held. The aim was to turn a 1.5 acre field into a wildflower meadow. It is open to the public 24 hours, with a Sustrans Cyclepath through its length and it is a CADW Scheduled Monument, adjacent to the Roman Fortress. So it had to be kept open while introducing wild flowers, with no digging!

Stephanie Tyler who is currently one of MMG’s presidents advising on meadow management and plant identification surveyed the field and gave advice on how to start. An Entrust Landfill Tax was granted, and soon there was a twice-yearly mowing and baling programme underway.

With help from local schools a “Grow Wild” project was undertaken with guidance from the Royal Botanic Gardens, Kew who supplied a number of their wonderful seed kits, and this produced hundreds of wildflower plugs which were planted across the field. The whole field was chain harrowed and rolled whilst a large amount of seed was hand sown, especially Yellow Rattle, and soon the field started to flourish.

With the help of many volunteers, the field perimeter was cleared, trees pruned, fences replaced, walls mended, and rubble removed, so perennial wild flower borders could be established, where before had been nettles, brambles and much litter.

The Entrust grant allowed the spreading of sterilized topsoil and then “Wildflower Earth” in the spring of 2019 which brought impressive results in the summer.

NB: “Wildflower Earth” is produced by the people who landscaped the London Olympics in 2012.

Now that all perennial beds are established, all there is to be done is mow footpaths each spring and mow the field each summer – with horses when possible! Or by hand if necessary.

In 2020, despite a damp August, with the help of a friendly farmer, most of the meadow was cut, turned and baled – with bales removed. The wildflower borders were left intact to allow heads to dry, mature and release their seeds.

On a glorious September Sunday a team of socially distanced Festival volunteers convened to complete the job, cutting and raking the wildflower borders.

In mid-October our enthusiastic volunteers “enjoyed” hand sowing six kilos of wildflower meadow seeds throughout the entire field. The following day, our friendly farmer Owen harrowed the seeds into the entire field. After more raking the field, or should it be said the Meadow, was ready for the winter.”

By Bryan Dale the Director of Field Operations for Celf Caerleon Arts.

Further accounts of the four-year project that is funded by the Landfill Tax Fund can be seen on the Caerleon Festival website: www.caerleon-arts.org