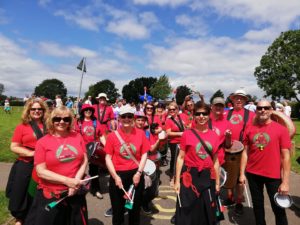 Velha Bataria Samba Band is a Community Samba Drumming band based in Newport and Chepstow. They were established in 2016 in Chepstow and have given over 60 performances, many of which were at local community events.

Samba is Afro Brazilian music, It’s origins lie in the dances and religious practices of the West African slaves that were brought to Brazil during Portuguese colonisation in the 1500’s.