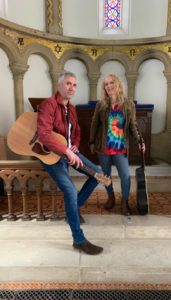 Huw Knight and Viv Bell are two singer songwriter/guitarists who live in Bromyard, Herefordshire, although Huw is originally from Newport in Wales, and Viv is a Geordie.

Knight & Bell write and perform their own songs, and their music is a unique blend of vocal harmonies accompanied by dynamic acoustic guitar arrangements. Viv writes a lot of songs about her homeland in the North East of England. They released their debut CD in April 2019. The CD gained many positive reviews and the first run sold out within 8 weeks! They are in the process of recording their second CD which will be ready for release in winter of 2021. Recordings they have made are regularly played on the local radio station BBC Hereford and Worcester.

Festival at Tintern, Chepstow, July 2021, and the Falcon Mews Venue, for the Bromyard Folk Festival, September 9th 2021. Past performances include: the Floating Globe stage at Lakefest, Nosztock Slippery stage in 2018 and 2019, Mitcheldean Festival, Churchdown Beer and Folk Festival Gloucester, and numerous appearances in local pubs and venues. They have already been booked for a festival appearance in 2022.