About Advent – The historical research is deep but worn lightly in this novel : the period feels intimate, breathing with vocabulary of place and time, village life intimately drawn. It’s an atmospheric story sustained throughout with a simmering, elegant tension. Ruth McKee, Irish Times

Rob Penn is a British writer, photographer and broadcaster. He is a frequent columnist in UK na- tional newspapers and has written widely on such subjects as cycling, travel, British woodland and life in the Brecon Beacons.

Rob may be most familiar to viewers in Wales from his 2013 TV series Tales from the Wild Wood – about Strawberry Cottage Wood near Abergavenny.

In 2015 Rob published The Man Who Made Things Out of Trees – he cut down an ash tree to see how many things could be made out of it. Rob’s latest book is called Slow Rise : A Bread Making Adventure. It featured as BBC Radio 4’s Book of the Week in March 2021. ckets available on-line or from Caerleon Post

Steven Lovatt is the editor of An Open Door:NewTravelWriting for a Precarious Century, published this May by Parthian Books. Steven is an established writer, teacher, reviewer and editor, based in Swansea. He will be in conversation with a number of the contributors to An Open Door.

Jan Morris wrote that,“if the mountains secludedWales from England, the long coastline was like an open door to the world at large.” The history of Wales as a destination for English writers is well known, but this book reverses the process, turning a Welsh gaze on the rest of the world.

Taken together, the stories of An Open Door extend Jan Morris’s legacy into a turbulent present and even more uncertain future.Yet these pieces also show the enduring joy and value of travel itself.As one of the contributors, Eluned Gramich, expresses it, “It’s one of the pleasures of travel to submit yourself to other people, to be guided and taught”

Jon Gower has been a great supporter of the Caerleon Festival over the years. He is a leading figure on the Welsh arts and literary scene.

His latest book is ‘The Murenger and Other Stories’ published by Three Imposters in 2019. We are looking forward to the publication next year of his book ‘The Turning Tide – A Biography of the Irish Sea’.

Jon has been a Hay Festival International Fellow. He is a former BBC arts and media correspondent who has been making documentary programmes for television and radio for 30 years. He has over 30 books, in both Welsh and English, to his name.on Jon will be talking to us about ‘My Life in Short Stories’. 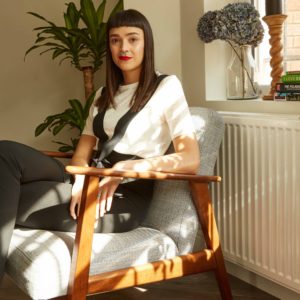 Abigail Bergstrom Abigail was, in her own words, ‘born in St. Julians and went to school in Caerleon where I grew up’. Her debut novel is ‘What a Shame’.

An intelligent, moving and darkly comic debut, taking us deftly from serious explorations of trauma and consent to riotously funny scenes of modern life….it’s like Fleabag with a sprinkling of the occult. The Sunday Times.

Dark, funny and immediately intimate, ‘What a Shame’ is an emotionally engulfing account of a woman in search of peace.

Abigail has worked in publishing for over a decade and is an industry leader in navigating the cross section between digital and print. She’s edited some of Britain’s most prominent feminist voices and was nominated for Literary Agent of the Year 2020. 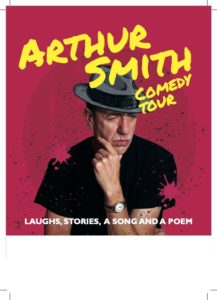 Expect an evening of sublime playfulness, crammed with jokes, anecdotes, short stories, poems, songs and readings from his recently published memoir My Name Is Daphne Fairfax.

A BBC regular, well-known for his appearances on TV’s Grumpy Old Men,Q.I.,Have I Got News ForYou,Radio 4’s Loose Ends, Balham Bash, and host of Radio 4 Extra’s Comedy Club, and Radio 2’s Smith Lectures. He is also a Spirit of The Fringe award-winning Edinburgh Festival stalwart. Arthur is simply one of our funniest and most original comic performers and is guaranteed to bring you a night of hilarity, mirth and scandal … with a touch of rudeness thrown in for good measure.