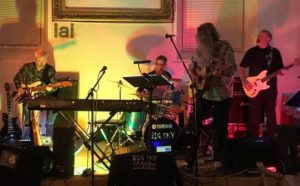 Big Sky is a local band that plays roots rock, infused with touches of blues, country and psychedelia. They are one of the few bands consisting of brothers who are yet to have on-stage altercation!

The band started life as an acoustic 3-piece group around 8 years ago and has slowly transformed into a fully electric 4-piece group with the current line-up having been together for just over 3 years.

The band covers everything from traditional folk to classic rock, stopping off at most points in between. They also perform their own material having played a gig at Bristol’s prestigious venue The Fleece.

Andy plays electric guitars, enhanced through his synthesised box of tricks. Phil handles the bottom end on bass along with his magnificent electric wardrobe!

Jem is the band’s latest addition, drummer and brother of founder member, singer and acoustic guitarist Julian. They will be playing their electric set for the Festival on Sunday evening between 9.00 pm-9.45 pm on The Hanbury Quay.