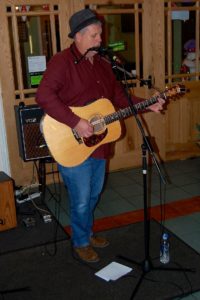 Huw James is a singer/songwriter from the Gwent Valleys of South Wales. He writes in a variety of styles although mostly his songs can be seen to be influenced by a folky, bluesy feel.

Huw’s main instrument is guitar which he has been playing since teenage years, along with a bit of bass. He has also added the harmonica to his repertoire to help enhance some of his bluesy feeling tunes.

Has been a long-time member of a successful South Wales covers band named Flashback who played all over South Wales and the South West of England as well as being invited by The British Community Association of Egypt, to make two appearances at The Queen’s Birthday Ball at The British Embassy in Cairo in 2002 and 2004.

Following on from Flashback, Huw continues to front an acoustic trio named 3MPH, along with ex-Flashback members Pete and Mike which, to date, has been a vehicle for his self-penned songs.

Whilst continuing to work with 3MPH, Huw is also performing as a solo artist and is currently working on a solo EP, on which a few musician friends are being invited to perform and should hopefully be complete by Summer 2019.