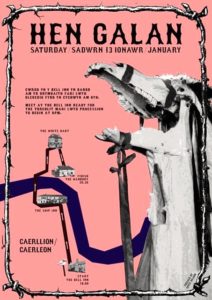 Join the  performers, Yr Hyddgen starting at the BELL INN at approximately 6.00pm. Follow the torchlit procession  to the SHIP INN then on over the bridge to the WHITE HART finishing with a performance and Nosen Lawen at the HANBURY ARMS. All times are approximate.

Background: Yr Hyddgen, Hanes Gwerin is Theatr Gymunedol. They play the Mari, the Hen Dyn involving the Chieftain singer of the Pwnc (the singing challenge) together with a benevolent old man of the woods leading the Mari.

The Mari party consists of:

Allowing Mari, this magical horse, into your dwelling is to be encouraged, even welcomed because on leaving, all evil and bad luck leaves with her. She collects it and makes it good again, but even then she can be mischievous by maybe throwing soot (ha) around the house unless, that is, Cwrw (beer) is offered as a gift to reward her visit.

For even more details of this ancient tradition look online >>

These old photos show the tradition of Mari Lwyd c. 1910–1914 being carried from door to door during Calennig in Wales 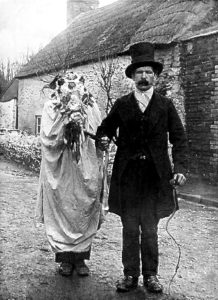 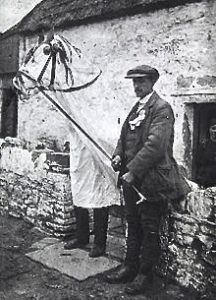 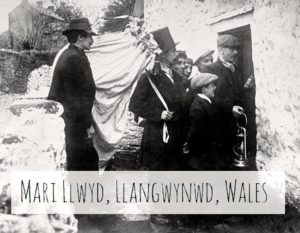