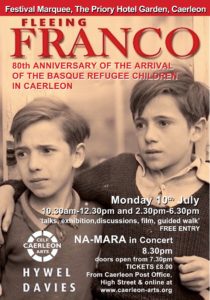 80TH ANNIVERSARY of the BASQUE REFUGEE CHILDREN’S ARRIVAL IN CAERLEON

In May 1937 around 4000 children arrived by boat at Southampton. They were refugees from the Basque area of Spain. On July 10th 1937, 56 of those children came to Caerleon.

Even if you have already heard the story of the Basque refugee children in Caerleon there is always more to reflect on and learn – and commemorate.

ITINERARY FOR THE DAY

10.30am Opening of the exhibition of photographs and press cuttings from 1937/8, in the Festival Marquee. The exhibition will be available to view throughout the day until 7.00pm

11.00am   A three-way conversation about the reasons for the children coming to Wales and to Caerleon; the children’s experience of life in Caerleon and how the children were supported by the wider community, with:

Copies of Gail Giles’s pamphlet and a range of items from the National Association will be available to buy in the Marquee.

12.30pm    Break for lunch – The Priory restaurant and a range of other local eating opportunities.

3.30pm     A short guided walk around Caerleon village to see where the children lived.