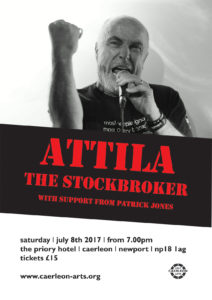 You will be introduced to Attila the Stockbroker by Patrick Jones.

The world is going nuts, Attila the Stockbroker is writing about it – and he is more fired up than he has ever been in 36 years as a performance poet. He’ll be performing pieces from his newly published collection Undaunted – the title says it all – extracts from his recent autobiography Arguments Yard (Cherry Red Books, 2015) as well as a few of his songs, accompanied by his trusty mandola, Nelson. Laugh, cry and get very, very angry.

Launched into public consciousness by legendary Radio One DJ John Peel in 1982/83, Attila the Stockbroker has toured the world performing his sharp-tongued, radical social surrealist poetry and songs, releasing over 40 CDs/LPs/singles, 9 books of poetry and his autobiography.

Patrick Jones Tredegar born Jones is considered by many to be one of Wales’ most resonant contemporary poets. Drawing heavily on his south Wales Valley’s heritage he is a champion of the downtrodden and the marginal. As both a poet and playwright Jones has collaborated with many of Wales’ best known individuals and institutions including, James Dean Bradfield, Sherman Theatre and National Theatre Wales. Prominent amongst his work is the play, Everything Must Go, whose title was subsequently appropriated by Manic Street Preachers for the title of their fourth studio album.