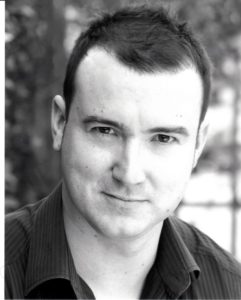 Huw Euron is a Cardiff born Bass and a professional actor who has appeared in numerous television and film productions over a career spanning 18 years. His most recent credits include Hinterland (BBC/S4C), Stella (Sky 1), Casualty (BBC), Gwaith Cartref (S4C), Alys (S4C), Indian Doctor (BBC) and Pride (Proud Films), however he is probably most associated with the role of “Darren” in the popular Welsh soap ‘Pobol y Cwm’(BBC Cymru/Wales). He is a National Eisteddfod of Wales finalist and winner in Lieder, Oratorio and Bass Solo Class.

He has performed leading roles with Opra Cymru/Wales as Banquo in Macbeth (Verdi) and Dr. Bartolo in Barber of Seville (Rossini).
Huw had the honour of performing as a soloist in the UK premiere of ‘The Poets of Wales’ by Sir Karl Jenkins. Highlights to date include performing at the opening ceremony of the London Olympic Games 2012 where Huw performed with Only Men Aloud in front of a worldwide audience of 900 million people.