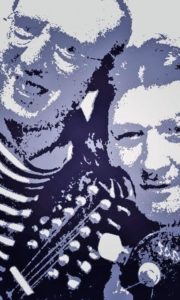 Will Smith and Richard Dinning

Willy and Dicky  are a fun combo  involving guitars and banjos

They are local musicians who play in various other bands  such as Rokgrass and Two HatsTrio  (these are each appearing elsewhere over the Festival period.)

Willy and Dicky really are Will Smith and Richard Dinning  “c ya soon!” as they both say!!