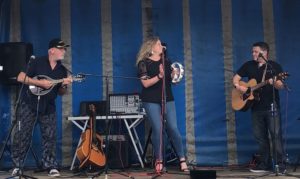 Lisa, Nick & James have been performing together for over three years as One-2-Many. They are still arguing about who is the ‘One’ in One-2-Many.

The band, based in Ponthir were often to be seen in local venues around Caerleon & Newport pre-Covid. Their last appearance at the Caerleon Festival was in 2019 on the Manic Street Preachers Stage at the Hanbury Arms.