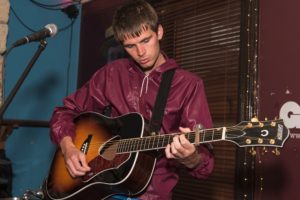 Jack Perrett is an indie singer/songwriter from Newport, South Wales. Jack released his first EP ‘What You Saying?’ under the guidance of Estrons producer Steffan Pringle in 2015 to critical acclaim, receiving airplay and playlist status on BBC Radio Wales.

Jack’s release ‘Like A Fever’, saw him tipped to be ‘Big in 2019’ by Fred Perry Subculture and national promoters This Feeling describing the song as a   ‘high class out and out indie banger’.

The track has achieved national airplay on BBC Radio 1 (Huw Stephens), BBC 6 Music (Chris Hawkins), Radio X (John Kennedy and Gordon Smart). 2019 indeed proved to be a sucussful for Jack as he went on to perform at Isle of Wight and Great Escape Festival.

More recently, Jack has joined forces with fellow Newport singer/songwriter Dan Burridge to create their new indie outfit ‘Eurekas’. Although there are no recent releases, the Newport rockers have already built a decent local following which was highlighted by a sell out show in Le Public Space in December 2021.