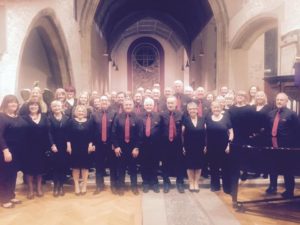 In the summer of 2006, a call was made to all supporters of the four regions of Welsh Rugby.asking whether anyone could sing in support of their region

Over 80 people answered the call in support of Newport Gwent Dragons, it was for the new S4C reality show Codi Canu.

Fifteen years later the choir is still going strong. They continue to support the Newport Gwent Dragons at many of their home matches.

They sing at weddings and many other special occasions where they raise money for a number of charities either through their own concerts or by performing as guests at other charity events.

Around 50% of their repertoire is sung in Welsh, which is taught phonetically for those members who do not speak the language.

Côr y Dreigiau is always looking for new members, especially tenors and basses – so if there is anyone interested, please get in touch.