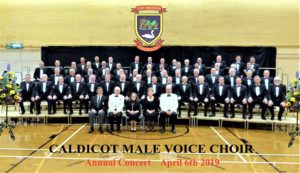 The Choir was formed in 1963 and has risen to be arguably one of Wales’ leading male voice choirs.  It has toured extensively throughout the USA and Europe as well as appearing on two P & O Cruise ships. The Choir has performed for Royalty on a number of occasions, the most recent being at Buckingham Palace to perform for HRH Prince Charles, following its performance at the Royal Albert Hall in 2018.

Not only does the Choir aim to promote and encourage a part of Welsh culture in its choral singing but it has raised several hundreds of thousands of pounds for local and national charities in its history. It supported The Welsh Air Ambulance Service during 2021 and is supporting Ready, Steady, Go, a local charity based in Magor which supports children suffering from autism and their families.