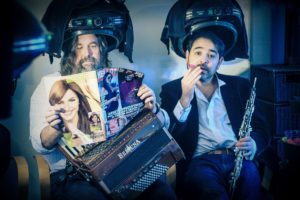 Paul Hutchinson and Paul Sartin play like no-one else you’ve ever heard. Their music is breath-taking and wickedly inventive and the between-tunes interchange as intelligent and hilarious as the music. But don’t let me give you the impression they’re a lightweight comedy act: they finish the set with a haunting piece of oboe and accordion magic which has the audience spellbound.’

‘Amidst the jesting and hilarity, they sit as fine an example of traditional English folk music as you’re likely to hear.’ Mike Ainscoe, Bright Young Folk

Paul Hutchinson (accordion) and Paul Sartin (oboe, violin and vocals), “one of folk’s odd couples”, have for nearly 25 years wowed audiences around Europe, The States and Australia, with virtuoso musicianship tempered by wry humour. With extravagant lifestyles to support, as well as a love of music, their candle looks set to burn for a good few decades more.

Singer, oboist, cor anglais player, swanee whistle afficionado, violinist and pianist, Paul Sartin is a BASCA-nominated composer, arranger, performer and teacher. A founding member of the BBC award-nominated ensembles Belshazzar’s Feast and Faustus (German Critics Award 2017) and the late Bellowhead, he is also Director of the Andover Museum Loft Singers. His latest publication is ‘Community Choirs Folk’ for Faber Music and Paul also arranged and directed the music for the 2017-18 revival of ‘The Transports’ (Guardian *****). He was awarded a First for his Masters in Traditional Music, and in 2007 received a 75th Anniversary Award from the English Folk Dance and Song Society.

Paul Hutchinson is the founder member of the innovative and progressive folk band, The Playford Liberation Front. His highly successful folk trio Hoover the Dog has recently morphed into the critically acclaimed Pagoda Project. Paul’s own compositions were published in 2012 (Food For Thought) and a second volume is in the pipeline.  He is the resident accordion tutor at Cecil Sharp House, is a seasoned tutor at Folkworks and Halsway Manor, and leads ensemble workshops far and wide.

Belshazzar’s Feast start with traditional English folk music, throw in a bit of pop and classical, sprinkle over a few TV and movie themes, and top it off lashings of laughs for a unique live experience.  Belshazzar’s Feast received a coveted nomination for Best Duo at the BBC Folk Awards.

In May 2021 Paul Hutchinson will retire from the band so Belshazzar’s Feast last tour will be in May 2021.

‘Few can match this duo in concert for entertainment and great music’ The Independent.

The album ‘Live! : The Whiting’s On the Wall’

(Unearthed, distributed by PIAS, cat no EARTHOL004) was released in 2014

Tickets can also be bought from ‘Diverse Vinyl’ Newport.