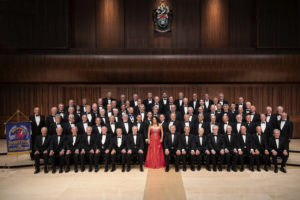 This internationally-acclaimed Welsh male choir enjoys a reputation as a leading exponent of male choral singing.

The Choir is approaching its 85th birthday, having been formed in 1935 in what was then a small industrial town outside Swansea. It now draws its members from across south Wales—if you’re thinking of joining, just talk to any chorister!

Under its current Musical Director, Joy Amman-Davies, the choir performs a wide variety of music in English, Welsh and other languages. It has amassed a vast repertoire that includes gospel music, West End favourites, operatic pieces, religious material, and of course the Welsh classics. There is an ongoing process to introduce new works and to re-visit and hone the existing numbers.

Several of the choir’s CDs have won prestigious awards, including the Music Retailers’ Award for Best Choral Record of The Year (three times!) There is an excellent website which has an online shop for the purchase of CDs and MP3s and which is kept up-to-date with the choir’s activities—www.MorristonOrpheus.com

The choir is ably supported by MOCSA, its supporters’ association. MOCSA also runs the annual ‘MOCSA Young Welsh Singer of the Year’ competition, now in its 44th year, to encourage the development of young Welsh vocal talents. The winners and the choir then gain the mutual pleasure in performing together at subsequent concerts.

The choristers are still glowing from the honour of performing at the Centenary of the Somme commemoration in July 2017. A chance encounter with the Minister for Culture at the Menin Gate a few months before led to the choir singing Keep The Home Fires Burning and Abide With Me to a crowd of 10,000 including heads of state and royalty.

2019 didn’t let up, with highlights so far including a sell out joint concert with the Briton Ferry Musical Theatre Company at the Gwyn Hall in Neath, and singing onboard the Saga Pearl II cruise ship before she departed on her farewell tour of Africa. We have also performed a St. David’s Day concert at The Ffwrnes Theatre in Llanelli, and our Annual Gala Concert in June. In September 2019 we enjoyed a very well received tour to Tralee and Macroom, in Ireland.