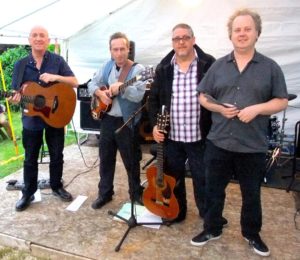 Allegria was formed 20 years ago in Newport, following a meeting of musician friends at a party where it soon became evident that there was a common interest in musical genres such as Jazz Manouche with Django Reinhardt being it’s main exponent and latin and gypsy rhumba popularised mostly by the Gypsy Kings.

Early in 2000, a three-piece group started playing a few ‘low key’ gigs at a café in Cardiff.

Allegria’s repertoire quickly attracted interest in their rhythmic and dynamic style of music, appealing to listeners and dancers alike.

The current line-up consists of:

Nic Pucacco – acoustic guitar, vocals: Nic started out as a drummer laying the foundation of his powerful swing and flamenco-driven guitar style.

Julian Smith – bass guitar: Julian, besides playing bass, is also an experienced guitarist, drummer and producer with several albums to his credit.