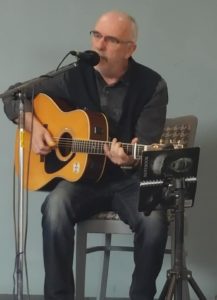 Bryn Millichip has been a keen follower of folk music for many years and has developed into a very accomplished singer and guitarist in his own right.  He is a very popular performer and never fails to entertain with his warm personality and good sense of humour. He has also developed an interesting selection of songs that will hold your attention and interest.

Tanglewood is an acoustic harmony duo based in Cardiff. They have been performing regularly in concerts and festivals in South Wales as well as at various venues in the Midlands and the North of England.  Over the last five years they have made over 400 live performances and have developed a very wide and eclectic repertoire consisting of traditional folk music, more contemporary acoustic songs as well as original songs. 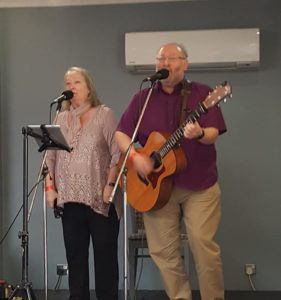 Paul Brown has enjoyed playing in folk clubs and has over 48 years experience playing in Folk Clubs and bars across the UK and as far as Japan. He is a multi instrumentalist on guitar, mando-cello and harmonica.  A crowd-pleaser. He performs a variety of contemporary and traditional songs, particularly Paul Simon, James Taylor and Neil Young as well as Nick Jones to name but a few.

Barry Scouse is a very experienced and well-known performer. He has an extensive range of songs to choose from based on his long experience of the folk music scene. His performances are always entertaining and delivered with his own unique style.  Barry is also a member of the very popular folk band Dragon’s Breath who perform regularly all over south, mid and west Wales and sometimes ‘over the border’ into England. They have played for festivals, concerts, ceilidhs, twmpathau, weddings, fundraisers and street parties.