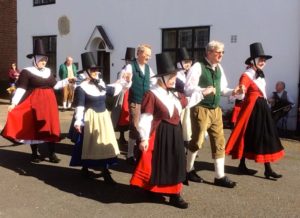 Gwerinwyr Gwent was formed in 1976 by eight people from the Gwent area who were interested in reviving the tradition of Welsh folk dancing. The name of the team can be translated as “Folk people of Gwent”

Their costumes are made from traditional Welsh flannel in a variety of colours and patterns with, of course the famous tall Welsh hat which they actually only wear for one dance, called Llanover Reel.

In the past Gwerinwyr Gwent competed in several Eisteddfodau, but now dance just for pleasure, taking part in festivals and demonstrations in Wales, England and Europe.