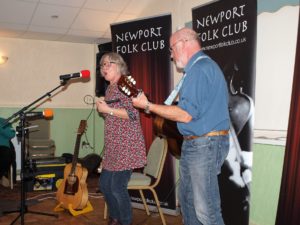 Cris Bartlett has been a regular performer at Newport Folk Club for many years, with a broad mix of American Country Blues and Ragtime, and traditional Folk songs in his repertoire. He has recently teamed up with Liz Harris who has brought vocal harmony and whistles into the mix, along with her own selection of songs and tunes, providing an enjoyable combination of music and song.

The set may include some of Liz’s own songs along with a few of their favourites which have been well received at clubs and festivals.