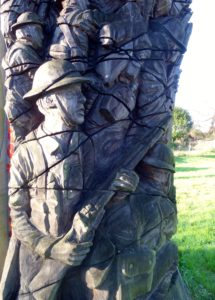 Caerleon commemorates the World War I Armistice in words & music.

This will be a moving tribute to local men and women who served, and especially those who lost their lives, in the First World War.

The evening will begin with the laying of memorial poppies in remembrance of the men who are listed on the Roll of Honour on the wall of the Church.

Sylvia Mason, author Every Woman Remembered, Daughters of Newport in the Great War

NO tickets will be available on the night at the Church door. 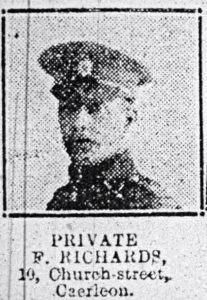 In late September 1918, the Allied armies were pushing eastwards towards the hitherto impregnable Hindenberg Line – Germany’s ‘last ditch’ defence stretching from the North Sea coast of Belgium to the France/Swiss border near Belfort. In the middle of this vast offensive effort, the 2nd Manchester Battalion was fighting alongside the 15th Lancashire Fusiliers (the 1st Salford Pals). The 2nd Manchesters, a battalion averaging 500 men included FREDERICK RICHARDS.

Fred had enlisted on June 3rd, 1915, in Bargoed. He had been working as a baker’s assistant in Tredegar. He was 22 years of age, single, 5’5” in height and just under 10 stone in weight according to his enlistment form. Fred’s military service record is one of the few that survived a direct hit on the archive in London in 1942 so we know more about Fred than most of his Caerleon compatriots.

He was born in Caerleon in 1893 – the third son of Charles and Thurza Richards, who had 4 sons and 4 daughters in total. The parents made a fine choice of names for their sons – Simpronious, Horatio and Oswald as well as Frederick Orlando. Charles was employed as a tiler and plasterer in 1911 and his sons found local work as a bricklayer, bricklayer’s labourer and in the Caerleon tin works.

Church Street, before the first World War, was wholly working class in character with about a quarter of the households having a father or son, or both, working at the tin works.

Fred’s military service started in June 1915 – he joined the Royal Army Service Corps as a Private. He served in the UK until May 1917 when he went to France and transferred to the 2nd Battalion of the Manchester Regiment. He was promoted to Lance Corporal in April 1918. He came home on 2 weeks leave at the end of June 1918.

At the end of September the 2nd Manchesters were fighting in the front line north of St. Quentin, east of the Somme valley in NE France. On September 30th, near the village of Joncourt, together with the 1st Salford Pals, the 2nd Manchesters undertook an initial attack on the German line.

The village was cleared on October 1st and a line was established beyond the village to the east. Part of the German defences here, known generally as the Fonsomme Line was a farm known to the British as ‘Swiss Cottage’. The capture of the area was assigned to the 2nd Manchesters on October 2nd.

Attacking at 4pm, 2 companies of the Manchesters broke through the enemy defences and held the ground they had gained. It was during this battle that Fred Richards was killed ‘in action’. He is buried near where he fell at Joncourt East British cemetery.

Wilfred Owen, the famous war poet, was the company commander of the 2nd Manchesters during that battle. Owen was awarded the Military Cross for his ‘conspicuous gallantry and devotion to duty on the attack on the Fonsomme Line on October 1st/2nd, 1918’ and was killed in action on November 4th, a week before the armistice.

In one of Wilfred Owen’s most famous poems, “Anthem for Doomed Youth”, Owen envisages the reaction of the home community of those young men who died.

In Church Street, Caerleon, Monmouthshire, we can perhaps imagine ‘…..…the bugles calling for them from sad shires’, and ’….….each slow dusk a drawing-down of the blinds’.