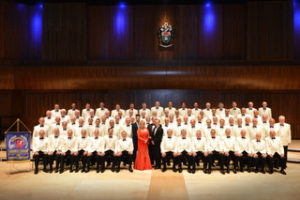 This internationally acclaimed Welsh male choir enjoys a reputation as a leading exponent of male choral singing. The choir recently celebrated its 80th birthday, having been formed in 1935 in what was then a small industrial town outside Swansea. It now draws its members from across South Wales.

Under its current Musical Director, Joy Amman-Davies, the choir performs a wide variety of music in English, Welsh and other languages. It has amassed a vast repertoire that includes gospel music, West End favourites, operatic pieces, religious material, and of course the Welsh classics. There is an ongoing process to introduce new works and to re-visit and hone existing numbers.

This year, the choir is joined by soprano soloist, Chloe Angharad Morgan.

Chloe studied jazz and classical voice at Trinity college of Music, London. During her final year at college she won a place on the prestigious Monteverdi Choir Apprentice scheme and has remained a member of the choir ever since. Most recently singing for HRH the Prince of Wales at Buckingham Palace and for a BBC Prom. She was awarded the Kitchen prize for international talent for her role as Betty Butterworth The Secret Garden (Mcneff) at the Banff Centre, Canada and was a finalist in the Bernadette Greevy competition in Ireland. In 2017 Chloë was a finalist in the Stuart Burrows International Voice Award and won the MOCSA Young Welsh Singer of the Year Award.

She has sung on countless film soundtracks including Harry Potter and The Lord of the Rings, and is featured as a solo artist on Love and Friendship (2016).

Chloë recently completed her masters at the Wales International Academy of Voice under the tutelage of Dennis O’Neill and Nuccia Focile where she also worked with Dame Kiri te Kanawa, Susan Bullock, Rosemary Joshua and Nelly Miricioiu.

Several of the choir’s CDs have won prestigious awards, including the Music Retailers’ Award for Best Choral Record of the Year on three occasions! There is an excellent website www.morristonorpheus.com which has an online shop for the purchase of CDs and MP3s and which is kept up-to-date with the choir’s activities.

MOCSA is the choir’s supporters’ association. It supports the choir but also runs an annual ‘MOCSA Young Welsh Singer of the Year’ competition, to encourage the development of young Welsh vocal talents. The winners and the choir then gain the mutual pleasure in performing together at subsequent concerts.

The choristers are still glowing from the honour of performing at the Centenary of the Somme commemoration last July. A chance encounter with the Minister for Culture at the Menin Gate a few months before led to the choir singing Keep The Home Fires Burning and Abide With Me to a crowd of 10,000 including heads of state and royalty.

In December 2017 the choir performed with the band of the Household Cavalry in the enormous Ely Cathedral, jointly delivering an astonishingly varied programme to herald in the Christmas season.

2018 will be another busy year with concerts, small and large and the choir enjoying the company of some outstanding soloists. In particular, the Annual Gala Concert will feature the renowned soprano Rebecca Evans, who is a past winner of the Young Welsh Singer of the Year competition. 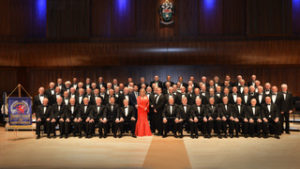