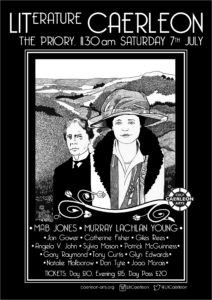 12.30pm ‘From Pembrokeshire to Passchendale and Perth – my family in the Great War.’  Tony Curtis 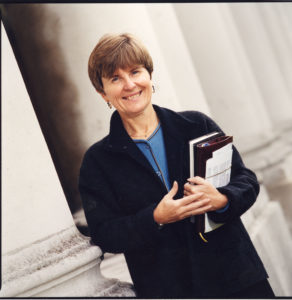 Angela V. John is a historian and biographer who has just published her twelfth book, a collection of essays called ‘Rocking the Boat: Welsh Women who Championed Equality, 1840-1990’. It explores the lives of seven feisty Welsh women who challenged convention, supporting women’s suffrage and much else beyond as well as within Wales. Angela’s most recent book, ‘The Actors’ Crucible: Port Talbot and the Making of Burton, Hopkins, Sheen and All the Others’ focused on her childhood home. Her other biographical subjects include Lady Rhondda whose spectacular story is explored in Welsh National Opera’s ‘Rhondda Rips It Up!’

Sylvia Mason was educated at Lady Margaret High School, Cardiff, The Western Theological College, Bristol and Bristol University where she gained a BA and PGCE. While her son and daughter were young, she gained a Master’s degree with the Open University, her specialism being Victorian poetry. Her career was spent as a teacher of English in Bristol, Newport and the Valleys.

Her book, Every Woman Remembered: Daughters of Newport in the Great War, features accounts of the Newport women who died in service in WWl and also others who did so much for the war effort in the town. The contributions of women are often overlooked, but it’s clear that the war would not have been won without their efforts. In addition, their work changed the lives of the women who came after them.

Glyn Edwards was described by The Wales Arts Review as one of the ‘most exciting young voices in Welsh poetry’. His first collection will be published this autumn by The Lonely Press. He is co-editor of The Cheval Anthology, an anthology comprised of entries to the Terry Hetherington Award for young writers in Wales, and is a teacher in North Wales. 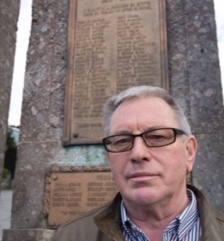 Tony Curtis is Emeritus Professor of Poetry at the University of South Wales. He won the Dylan Thomas Award in 1993, and in 2001 he was elected Fellow of the Royal Society of Literature.

He was born in Carmarthen in West Wales in 1946. He studied at Swansea University and Goddard College, Vermont and is the author of several collections of poetry. He has also written books of criticism, including The Art of Seamus Heaney(1982), Dannie Abse, Writers of Wales (1985), How Poets Work (1996), Welsh Painters Talking (1997), Welsh Artists Talking (2001), and Wales at War: Essays in Literature and Art (2007). 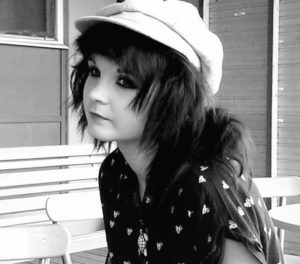 Natalie Ann Holborow is a Swansea-born writer. She won the Terry Hetherington Award and the Robin Reeves Prize in 2015, and her debut poetry collection And Suddenly You Find Yourself was published by Parthian in Kolkata, India in 2017. She is currently writing a non-fiction book for young people on living positively with Type 1 diabetes as well as a debut novel.

Jon Gower grew up in Llanelli, Wales and studied English at Cambridge University. A former BBC Wales’ Arts and Media correspondent, Jon has been making documentary programmes for television and radio for over 30 years. He has several books to his name, in both Welsh and English. They include An Island Called Smith (2001), about a disappearing island in Chesapeake Bay, which gained him the John Morgan Travel Award, and Uncharted (2010), a novel set in Buenos Aires, Oakland, California and Cardiff, which was described by Jan Morris as ‘unflagging and unfailingly inventive‘.

Matthew G. Rees has been undertaking a doctorate at the University of Swansea into the relationship between imagery and fiction. His short stories and essays have appeared in print and online. In his early career he was a journalist. For a period he lived in Moscow where he taught English at a school near the Kremlin. Recently he has been co-ordinating the launch of a new literary magazine online. His short stories lean to the supernatural. One, The Tip, about a nightmarish evening in Moscow, has been called a “Gogol-esque masterpiece”.

Catherine Fisher is an acclaimed poet and novelist, regularly lecturing and giving readings to groups of all ages. She leads sessions for teachers and librarians and is an experienced broadcaster and adjudicator. She lives in Newport, Gwent. Catherine has won many awards and much critical acclaim for her work. Her poetry has appeared in leading periodicals and anthologies and her volume Immrama won the WAC Young Writers’ Prize. She won the Cardiff International Poetry Competition in 1990.

‘Catherine Fisher – one of today’s best fantasy writers.’ – The Independent

Mab Jones has read her poems all over the UK, in the US, Ireland, France and Japan; at festivals such as Green Man and Latitude; on BBC Radio 4 and supporting television’s Phil Jupitus at the Edinburgh Fringe. She was the recent recipient of a Creative Wales Award, one of the country’s highest arts honours. She has also been published in various newspapers and journals e.g. the Spectator; has appeared on BBC television and presented two BBC Radio 4 poetry programmes; is the founder editor of Black Sheep Journal and Black Rabbit Press and has blogged for Mslexia magazine and Write Out Loud. Currently, Mab runs International Dylan Thomas Day, is a freelance writer for the New York Times and teaches at Cardiff University.

‘A unique talent’ – The Times

“She is fantastic!” – BBC Radio Wales

Patrick McGuinness is a fellow and tutor at St Anne’s College, Oxford. He has written three collections of poems, The Canals of Mars, 19th Century Blues, Jilted City, and a novel, The Last Hundred Days, which was longlisted for the Man Booker Prize for Fiction. He has also won the Writers’ Guild Prize for Fiction and the Wales Book of the Year. In French it won the Prix du Premier Roman È̩tranger 2013. His memoir, Other People’s Countries: A Journey into Memory (Cape 2014) won the Duff Cooper Prize and the Wales Book of the Year, and was shortlisted for the James Tait Black and the PEN Ackerley Prize. His latest book is Throw Me to the Wolves.

Gary Raymond is a novelist, critic, editor and broadcaster. He is one of the founding editors of Wales Arts Review, and has been editor since 2014. He is the author of two novels, The Golden Orphans (Parthian, 2018) and For Those Who Come After (Parthian, 2015). He is a widely published critic and cultural commentator, and is the presenter of BBC Radio Wales’ The Review Show.

Dan Tyte’s debut novel Half Plus Seven – a ‘coming-of-age novel snorting with energy’ (Daily Mail), ‘a lethal cocktail of Bukowski and Mad Men’ (NME) – was published by Parthian in April 2014. His second novel, The Offline Project, is published by Graffeg in May 2018. He’s performed at Hay Festival, Edinburgh Fringe and co-founded the lit night Pyramid Scheme. He’s written for the Society of Authors magazine The author and his short story, Onwards, is taught regularly at the American University of Paris.

João Morais is from Cardiff. He has a Portuguese name as his father’s side of the family hail from Cabo Verde. He holds a PhD. from Cardiff University. He has been shortlisted for the Rhys Davies Short Story Competition, the Percy French Prize for Comic Verse, and the All Wales Comic Verse Award. He was longlisted in the New Welsh Writing Awards 2017: Americymru Prize for the Novella and is a previous winner of the Terry Hetherington Prize for Young Writers. He has also had many short stories, reviews, and poems published in the New Welsh Review and Wales Arts Review. His book, Things That Make The Heart Beat Faster, is a contemporary debut collection of stories beating paths through a capital city from street food markets and art galleries to the park and the pub.

‘João Morais’s “Yes Kung Fu” is a great slice of comic Cardiff urban realism, as if written by a Welsh Irvine Welsh’ – Independent on Sunday

Murray Lachlan Young is widely regarded as one of the best-known poetry voices in Britain, acclaimed poet, playwright, broadcaster and writer,  is celebrated for his hybrid mix of stand-up comedy and poetry with delightful commentaries on the bizarreness of contemporary life. Live and onstage expect flamboyant punchy wit and brooding subtext with empathetic humour.

Ignoring the boundaries between poetry, rock-n-roll and comedy, current poet-in-residence at BBC6 Music, Murray Lachlan Young is many things, but above all one of the most distinctive wordsmiths of our time. Unmissable!

Whilst the day and evening events are separately priced at £10 and £15 respectively, a day pass of £20 provides entry to all of the events.