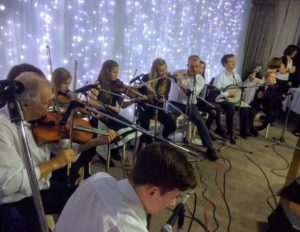 Amairgin the Gael is the only Welsh branch of Comhaltas, an organisation that promotes Irish music and culture around the world. During term times the club runs lessons for musicians of all abilities on Tuesday evenings at St Julian’s Church Hall. They also hold Irish music sessions on the first Friday of the month in the Picton Arms. A big event for the club each year is the Fleadh Cheoil. This is an a Irish music competition, similar to the Welsh Eisteddfod, which always sees a big group travel from Newport to Princethorpe College near a Rugby to compete in the Midlands Regional Fleadh. This year, as in most years, a number of club members won trophies and qualified to compete in the All Britain Fleadh in June. The club is hopeful that members will do well there and qualify to compete in the prestigious All Ireland Fleadh in Ennis, Co Clare in August.