For 130 years the Treorchy Male Choir has been recognised as one of the greatest choral ensembles of all time. Early competition victories were followed by regular radio and television broadcasts, feature films and an unequalled number of commercial recordings. The Choir has given several Royal Command Performances, appeared alongside very many international entertainers and undertaken an enviable number of tours abroad.

“I sang with the Treorchy Male Choir in their rehearsal room while doing a documentary about Wales for the BBC. It was a wonderful, unforgettable moment and t0 experience Wales’s premier choir at close proximity was a tremendous delight. Your rendering of “The Lord’s Prayer” completely devastated me and I had great difficulty holding back the tears. Treorchy Male Choir is “nuli secundi” – second to none. They are in a class of their own and the best choir in the world.”

“I once made a recording with the Choir and I must say how brilliant they are and what a privilege it was to work with them. The tracks we recorded were actually hymns and the Choir certainly created the right heavenly atmosphere.” 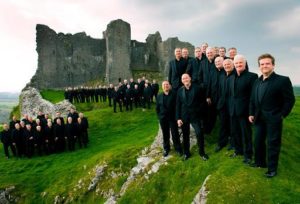