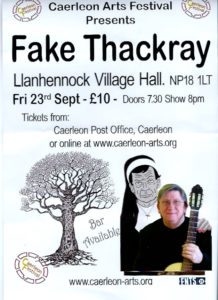 John has toured the show with Fairport Convention on their 6 week nation-wide tour, and has performed 20 shows at the Edinburgh Fringe, earning several 4 star reviews. He has also been delighted to support Ralph McTell, Richard Digance, Vin Garbutt and many more of his music heroes.

Fake Thackray is in increasing demand for clubs, festivals, village halls arts centres and theatres, as well as house concerts and after dinner engagements. ‘It is wonderful that Jake still has so many fans across the country, and the younger generation are catching on to a

man who should be regarded as one of our greatest national treasures’ says John.