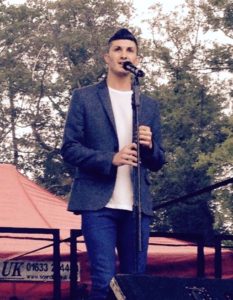 Scott Alexander is 24 and was comes from Pontypool. He has been performing since he was 6 and went on to have a classical training for 9 years.

In 2014 Scott was chosen to perform and meet HRH Princess Anne at a local recording studio. In 2012 Scott was part of the choir ‘Only Boys Aloud’ who finished 3rd in the finale of Britain’s Got Talent. Since then he has notched up some incredible credits including performing on shows such as Blue Peter, Songs of Praise, Who Wants to be a Millionaire, BBC Breakfast and the X Factor Final 2012. He has performed at many famous venues such as the Motorpoint Arena, Wales Millennium Centre & the Claridges Hotel. Runner up in Mister Wales 2013 going on to complete photo shoots in various magazines including Red Handed.