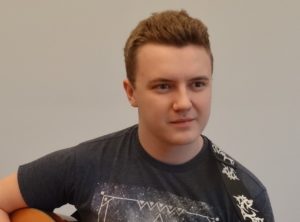 Host: Lloyd Warren lives in Caerleon and is studying at the University of Reading. He is already a veteran of the live music scene having started gigging at the age of 12. Lloyd is a familiar face in South Wales music venues and festivals and he has performed on radio and in the theatre as well as writing, recording and promoting live music events. Lloyd’s influences in rock music flow through classic covers with a chilled and funky twist. http://www.facebook.com/lloydwarrenacoustic

Julia Abbott is a guitarist and singer from Ponthir. She plays modern and classic ballads that compliment her melodic and enchanting voice based upon strong lingering lyrics

Rhys Hone is a guitarist and singer/songwriter from South Wales. He is known for his live presence and energy, playing upbeat covers as well as his own music.  www.facebook.com/rhyshonemusic

Izzi Lewis-Jarvis is a young singer and ukelele/guitar player from Caerleon. Izzi utilizes the bright tones of the ukelele and her sparkling sharp vocals to captivate the audience

Jack Perrett is a guitarist and singer/songwriter from Newport. He combines the best of Oasis’s unapologetic confidence with the timeless style of acts like The Jam and The Stone Roses. Jack released his debut EP in May 2016 and it has received airplay on radio and TV http://www.facebook.com/jackperrettmusic