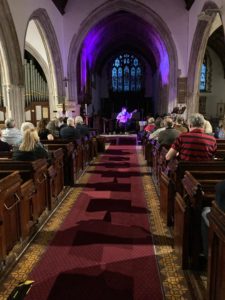 Daoiri’s return to Caerleon was triumphant.  At ease in the splendid Church where the accoustics so suit him, his voice soared, perfectly synchronised with his magnificent bouzouki playing.  The songs described by Daoiri as some tragic, some happy – all beautifully written,  he aspires to serve well.  Performed with such passion and precision he succeeded.  A splendid performance.

Thanks to both Daoiri and his father and thanks to St. Cadoc’s and the Caerleon Festival Team for organising this special event.   Tim