The Mari that HENRY LUTMAN made 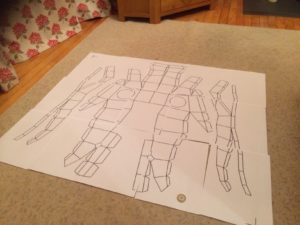 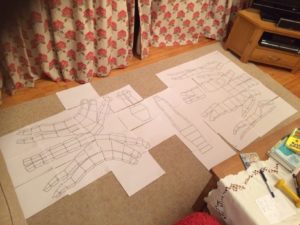 Shapes are cut out, folded, assembled and glued together. 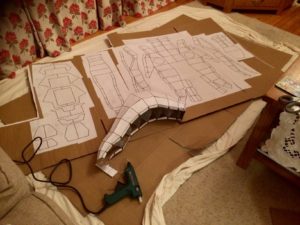 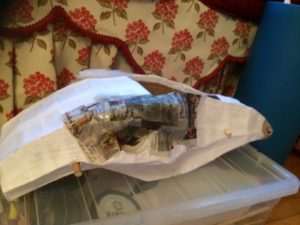 Some parts are built out with folded bubble wrap and covered in with extra layers of papier-mâché.

Internal mechanisms are also fabricated in cardboard and papier-mâchéd to give strength. Lolly pop sticks and toilet roll middle are also used.

The finished tongue made from cardboard, bubble wrap, papier-mâché, then painted.

Manufacture of teeth, mainly molars, made with card rolled around thin dowelling, then papier-mâchéd. 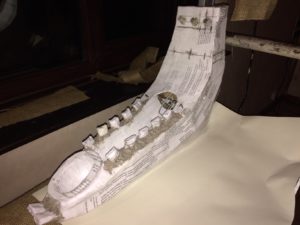 Teeth inserted into bottom jaw, as well as the top (not shown). 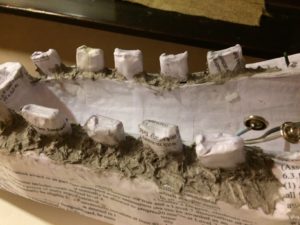 The material between the teeth is pulped papier-mâché. It is newspaper mixed with water and liquidised in a food processor. The water is then squeezed out using a tea towel, then the pulp is mixed with a big helping of PVA glue. 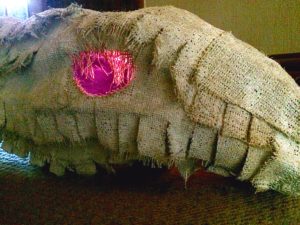 Mari has internal lighting installed then covered in hessian for the final mummified effect.

Lorraine Lutman is in charge of final design stages and will dress the Mari appropriately. Note the Festival logo on each cheek and with ribbons hanging from these in Festival colours.

The Building of the Caerleon Festival’s Mari Lwyd.

Henry Lutman has spent half his life in a career building many things including animals, but only in virtual space on a computer.  To him the thought of building something in real space for a change was very appealing.

The practicalities of fabricating something out of waste materials also had its appeal and so a cardboard frame was chosen, reinforced with layers of papier-mâché to give strength.

A 3D version of the skull was built on a computer and flattened out by unfolding within the computer.  This technique is ideal for planning the building of a cardboard frame.  If an alternative, like chicken wire had been used, then the 3D computer technique would not have been so adaptable.

With a fabricated horse’s skull, Henry, with his wife Loraine, was eager to build something with added value that would incorporate a surprise element, something that would keep small children awake for a couple of nights was considered ideal!!  These tricks have not been discussed here because the element of surprise would be spoilt.  A real showman or show lady never reveal the secrets of their art, suffice to say that lolly pop sticks, elastic bands, garden wire and strimmer-line have all been employed as internal workings.

8 responses to “The Making of the Mari”