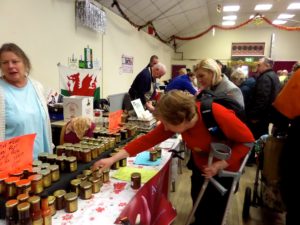 On Saturday, the 8th December it was official – the traditional “Christmas in Caerleon” had arrived.

The Farmers’ Market in a bedecked and welcoming Town Hall offered all that one could have hoped for and more.  Exhibitors excelled themselves.

With much to enjoy and music in a convivial atmosphere punters lingered with family and friends in true community spirit. 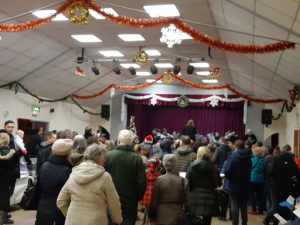 Santa arrived on time at two and his beady benevolent eyes identified “who had been naughty and who had been nice” since last he swooped.

Showers encouraged the Choirs on the Common (Charles Williams & Lodge Hill) and Schools’ band to relocate to the Town Hall where all enjoyed carols in a cosy community setting.  Meanwhile, storytelling at the Roman Baths enchanted and amused.

What a great weekend.

Thanks to all who planned, helped, exhibited and performed.

Thanks to the “Caerleon Tourism Forum”, our Councillors, Gary of the Town Hall, St. Cadoc’s Church, the Priory Hotel, Hathways, and others too numerous to mention.