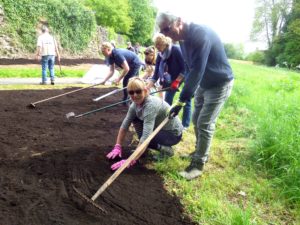 No, It’s not quite over yet! There’s still a bit to do in the Festival Field this autumn.

As both operations are weather dependent it is difficult to plan the exact days.

It will be carried out by Ian from Llanishen (Mon) who did the same task last year. The harrowing and rolling will be in two stages, with a gap of an hour or two between, which should give the team plenty of time to hand-sow –

Plenty of time to hand sow lots of wildflower seeds if  you want to join in and help.

The actual days in the weeks will be announced nearer the time.

Sat/Sun 29th/30th September @ 10.00am there will be cutting and raking off the Wildflower Earth areas, which shouldn’t take too long!

Looking forward to seeing you in the Field, for the last work of the year.