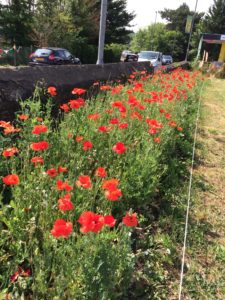 The Wildflower Earth laying went pretty well, lots of volunteers ensured the job was done quicker than expected. Although both the laying and germination were much later than expected, because of the weather, the areas came into bloom just in time for the Festival, thanks to diligent watering, and thanks to Max Perkins and Wilf Worrell for help in that.

Some areas did not germinate and thrive as hoped. They will be planted with the Grow Wild plug plants. The areas will be left as late as possible before close cutting with the new power scythe and any seeds produced spread around. Thought will be given as to where and how to apply next year’s consignment of Wildflower Earth.

The Kew Gardens Grow Wild plug plant project, involving all the Caerleon schools, as well as many Festival members, was only partially successful. Festival members produced a great crop of plants. Top prize goes to Catherine Philpot for her splendid array, with Barbara Gilfillan a close second, mainly for her dedication, which went as far as taking her plant tray on holiday with her. Over 300 thriving plug plants await planting out this coming weekend.

Thanks also to Maz Pope for her help and support before and during the Caerleon Festival weekend, as well as Sue Thomas for her positive assistance potting on.

The plan is for the main field to be close mowed, as last year in September/October, and possibly having it chain harrowed before a mass seed sowing event soon after, involving enthusiastic festival members, and possible Comp School pupils. Further Yellow Rattle will be sown, as well as lots of flowering perennials and annuals.

It is hoped to resolve the Carlton Terrace field wall situation, possibly with a patch and mend approach, before next Spring, so a land clear and level will be carried out, as was done with the main road/pavement field edge, so Wildflower Earth along it can be applied as well as other areas in the field.

It has been agreed to set up a Gateway Project committee, to focus specifically on plans for the field’s continuing development, and a meeting will be arranged soon.

The Caerleon Festival thanks all it’s members for their enthusiastic and energetic involvement over the past year, especially for Bryan Dale’s strong leadership