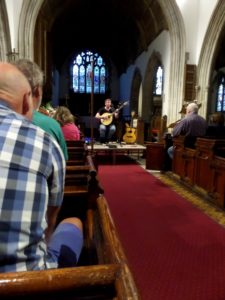 Daoiri (pronounced Derry, more or less) from Dublin paid his second visit to Caerleon on May 19th at the invitation of the Festival, playing this time in the relative grandeur of St Cadoc’s Church. He started life as an electrician, but clearly the career was not for him. His friends, he said self- deprecatingly, were not impressed by his skills – adding that he would be better described as an executioner.

So he became a musician. His dry wit pervaded his performance, but his beloved instruments – all powered by electricity – along with the rich, authentic Dublin accent which always helps with the delivery of jokes and comments, made it a memorable evening.

His  bouzouki playing, he has two of these instruments, alone has earned him an international reputation – performing as he does on many occasions with the hugely successful Four Winds band. But with his strong voice and eclectic range of songs ranging from the earthy (Boozing, bloody well boozing), the tender (John O’Dreams), the political (Shamrock Shore), the folksy (The Creggan White Hare), the songs of exile (Bound For Van Dieman’s Land) and the comical (McShane), he gave us an insight into the extraordinarily rich and appealing characteristics of the Irish.

The healthily large Caerleon audience loved him. We’re sure he’ll be back – and who knows, he might bring his band with him next time. Wouldn’t that be grand – as they say in Ireland! 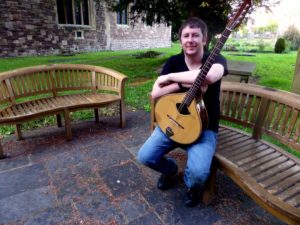