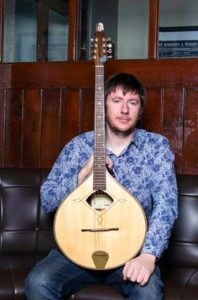 Take yourselves over to  Upcoming Events  and see details of the forthcoming concert being given by the amazing Daoiri Farrell on Saturday 19th May in St Cadoc’s Church 7.30pm for 8.00pm and buy your ticket…!

As one critic has written:

A former electrician, who decided to change profession after seeing Christy Moore perform on Irish TV, Dublin-born traditional singer and bouzouki player Daoirí (pronounced ‘Derry’) Farrell is described by some of the biggest names in Irish folk music as one of most important singers to come out of Ireland in recent years. Six months after releasing the album ‘True Born Irishman’ Daoirí won two prestigious BBC Radio 2 Folk Awards 2017 for Best Newcomer, and Best Traditional Track and also performed live at the awards ceremony at London’s Royal Albert Hall. In 2017 he has toured twice to the UK, Australia and Canada, and played major festivals in Ireland, the UK, Belgium, Denmark and more. In February 2018 he will tour with Transatlantic Sessions and has an official showcase at Folk Alliance in Kansas the same month.